Over more than a week I've done a series of drawings based around shapes with bulges, spikes, indentations and holes, modelled with hatching. These are mainly drawn in biro (depending on the surface), sometimes with Tipp-Ex or paint highlights, and sometimes with additional black added to shadows.

While they have something in common with some older sketches and a sculptural form I'm currently working in (more on that in a later post), they started with the visual score I did for last week's live vocal improvisation, which is the first image below.

This was actually influenced directly by some of the images from Twin Peaks: The Return, which I recently watched. Some of that influence also emerges in a couple of later drawings. 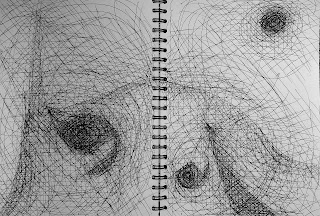 The next image was drawn on a box, and the one following that on a piece of card from the back of a book of postcards. This was a conscious decision to use cheap, coarse, limited, often reused materials.

You'll note that I didn't use the circling lines radiating away from the curves this time, and that I made the dark areas much darker, leading to the emergence of accidental pseudo-drawings from the shadows. 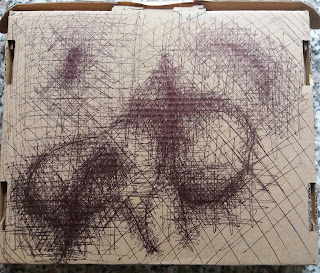 With the back of the book of postcards I first introduced highlights. These first three images don't quite share the same family resemblance that the later images do. Essentially I was working out where I wanted to go. 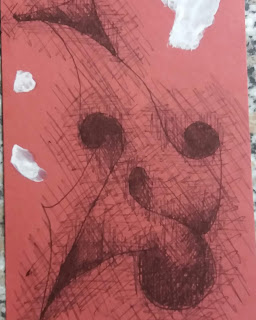 From here the images become more similar, resembling caves, rocks and bones on the one hand, and darkness, dreams, and dynamic transforming shapes as I wrote during a social media conversation.

The next two images are on postcards from the same book the red image came from. The first also uses the circling lines radiating from the curves. 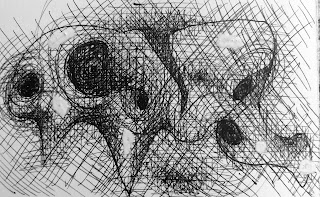 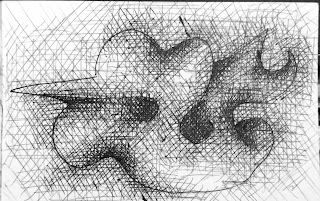 The next thing I tried was to create a 'negative' image. That is one where I build the hatching from the spaces that would be white in a 'normal', 'positive' image, rather than from what I call holes and cavities. These have a very different feel to them. 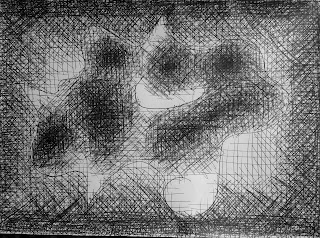 This was followed by two images on Post-it notes using the same outline as each other, one positive and the other negative. 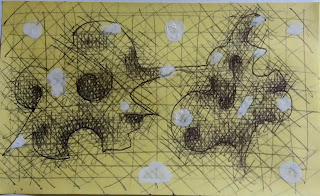 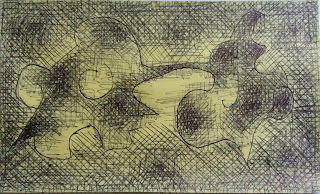 An innovation in the previous two drawings was to have two shapes joined by a thin bridge. This was picked up in the next image on an envelope, which includes three joined shapes. With my next drawing I revived something from the first image. In all the subsequent images I used closed, self-contained forms. Here I came back to opening the forms out at one side.

As an additional note, this image was intended to be aligned the other way up, but I didn't like it, so spun it round, and it works much better. 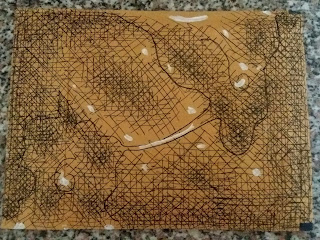 The next image is the visual score for this week's live vocal improvisation. You'll notice that here I've introduced coloured pencils. I haven't yet returned to them, but I think there's a lot of potential there. 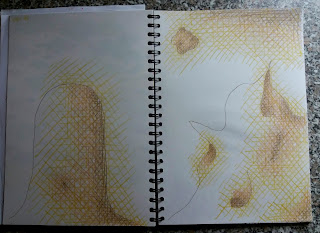 The next two images have a few similarities: they're both negative images; they both have the same column also in the score above, though both inverted and both with connecting bridges; and they both have at least two open forms.

But the second on is somehow more cloudy than the first, although it uses a much darker pen. 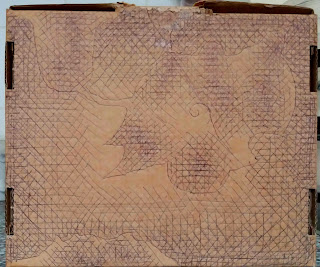 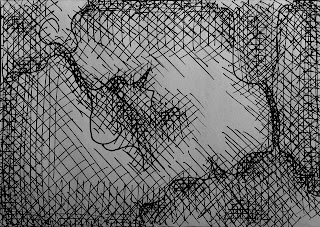 Finally I'm not really sure how well this last one works. I like it, but it's something different again. Here the shapes are not only open, in some cases they're lines. This is the first positive image for a while, the previous five were all negative. Though that said, while the forms are positive the background is negative.

This images also reintroduces the circling lines radiating from curves, though here they're deliberately broken. There are more paint highlights than previously. This image is also another I had to realign from how I drew it in order to make it work. 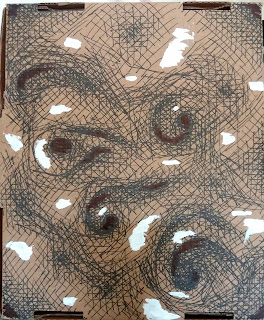 Watch out for more of these coming soon.