It's been a busy Sunday. Aside from a number of chores I've started the new episode of Stick Figure Asperger's, written and recorded the piece on my hernia and how it may affect my walks, and spent a lot of time to finally make five rooms available.

A new vocal improvisation/field recorded album, five rooms is now available on Patreon to patrons only throughout March.

five rooms was originally intended to be available at the start of February, but was delayed due to technical issues (me). It was recorded in a single day at various locations around Manchester.

The recording quality is deliberately rough, in one case aggressively so. That said, there was some minimal editing, and one of the tracks was re-recorded with a whole new improvisation because it killed the energy and momentum of the collection in its original form.

As I wrote previously, when I anticipated releasing the record sooner:

'five rooms is an exploration of physical and mental space, the confinements, biases, and occasional surprises. It presents itself as a conceptual tour of an apartment through sound, interrupted by field recording and inconclusive, unrelated anecdotes, before a small song either wrenches everything back on track or derails the whole affair.

five rooms was conceived and recorded very quickly, and is deliberately rough, with occasionally distorted recordings, minimal production, and for the tracks recorded outside lots of wind and traffic noise.'

You can become a patron for just a dollar a month. five rooms will available only to patrons until April. 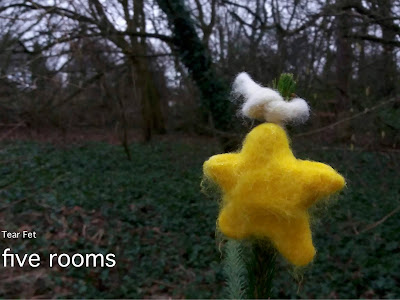 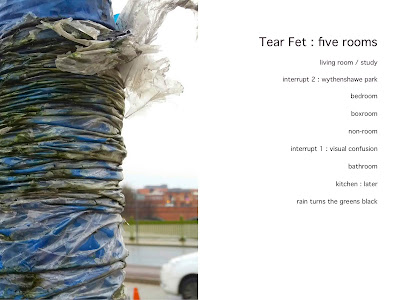 You'll notice from the tracklisting there are two 'interrupts' (technically three, but I'll come to that). These are field recordings made outdoors:

interrupt 2 : wythenshawe park is just that, a field recording of the park; and the first interruption despite the title.

There is a third 'interrupt', though it isn't indicated as such. That 'interrupt' is rain turns the greens black which not only interrupts but ends the album.

It also interrupts both the thematic unity and the procedures of the record. It isn't directly about or utilising the acoustics and physical properties of particular space. Nor is it a true improvisation. Rather it's a song (yes, some actual music of sorts) that was improvised and written down while sheltering from rain on the walk that yielded the other interruptions, then recorded at home later.

Something apparent now that wasn't when I recorded five rooms is how it fits into my broader practice, particularly the live vocal improvisations and the accounts of my walks, which seem to be converging.

The reason those two things are converging is because my last three accounts of walks have been much more impressionistic, and have begun to use increasing amounts of vocal mimicry of non-verbal, non-human sounds; and because I've started to create text and visual scores for the improvisations.

All this is prefigured in five rooms, in particular the 'interrupts', and most specifically interrupt 1 : visual confusion. At the time I thought this might form the model for disrupted narratives recorded in various locations at different times, and that might still happen. However, for now it's more important as a stepping-stone to my current approach to the accounts of walks.

Not because they're especially similar, but because they represent the kind of fragmented thoughts and impressions I might come out with if I spoke them as I went in the way I did interrupt 1.

So that's it. Go and become a patron, have a listen to my mess of a record and let me know what you think. Or wait until next month and get it then. Or don't do any of that, it's up to you. As for me I have a hot bath waiting, then I'm off to bed. Bye.
Email Post